It is our pleasure to announce the opening of a completely re-designed HIROKO KOSHINO TAKASHIMAYA Store in Nihonbashi .
Here it is exclusively possible for our customers to order Hiroko Koshino Haute Couture at anytime ,as well as enjoy selected HIROKO KOSHINO Preta Porter. "My designs and colours are youthful but when worn by a woman with considerable life experience a unique and exquisite atmosphere is born. The beauty of woman is clearly drawn in my mind as I design to the very last stitch. It is my great honor to see a womans pure beauty shine when she wears Hiroko Koshino.” Hiroko said.
Please drop by and enjoy if you are in the area. 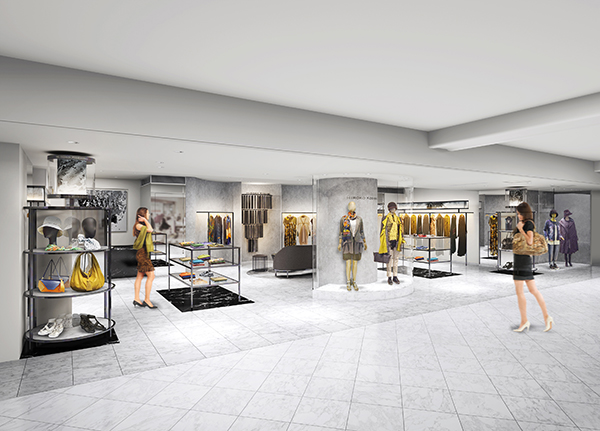 Each season, KH Gallery Ginza showcases the world of Hiroko Koshino, whose artwork explores a wide range of medium including fashion, painting, and lifestyle.

Traditional Japanese culture such as kimonos, Bunraku puppet theaters, kabuki, and the three-stringed Shamisen lute had been a part of Hiroko Koshino's life since the days of her youth. The significant influence of this childhood experience can be seen in Hiroko Koshino's fashion pieces and artwork, which express a unique worldview where Japanese and Western cultures intermix.

At this exhibition, the traditional beauty of Kyoto-style folding and paper fans will be introduced in three components.
First, 48 types of Kyoto-style folding fans, round fans, and paper fans featuring Hiroko Koshino’s artwork will be exhibited and sold. Against a screen surpassing the formal sector forms, the array of art pieces brings to life dynamic choreography of brush strokes dipped in Chinese ink, and indulge visitors in a fresh coolness that reminds them of great nature. The second part of this exhibition consists of a traveling exhibition from Kyoto, where the four-hundredth anniversary of the Rimpa School is being celebrated. The exhibition titled “RIMPA – The Rimpa School of Tomorrow Created by Eight Designers: Exhibition of Folding and Paper Fans” was held at the Tokiwa-Shinden of Yasaka Shrine in Kyoto, this March. Last but not the least, representative works of the three companies, which had given us great support in producing the exhibition pieces will be displayed: Itostune Corporation, Komaruya Sumii, and Kyo-Uchiwa Aiba.

The gallery invites you to come spend a cool and peaceful Japanese moment while feeling the transition from the summer breeze to the autumn wind.